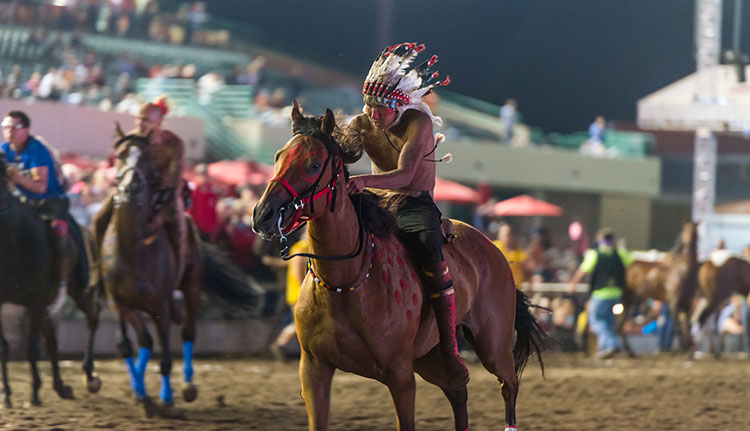 An Indian Horse Relay team consists of four members—a rider, a mugger, and two holders—and three horses. Riders mount their first horses bareback at the stall, while the holders restrain the other two horses. After making a lap around the track, the rider hops off of the first horse and mounts the second horse in a dazzling display of athleticism. It is the mugger’s job to catch the first horse. After repeating the process once more, the third and final lap ends at the finish line in front of the grandstand, where thousands of spectators are cheering on the teams.

Inside the grandstand at Canterbury Park, there will also be an Indian Market for guests to enjoy, featuring crafts, jewelry, beading, and artwork for purchase from several Native American vendors. The Indian Market is open all three nights of Indian Horse Relay.

History of the Event

The Indian Horse Relay at Canterbury Park began in 2013, when the SMSC was invited to the Apsaalooke Crow Nation to see their Native American horse racing event. The SMSC’s Mystic Lake Casino Hotel partnered with Canterbury Park in 2012, creating A Winning Combination, which presented the perfect opportunity to bring this sport to life in the area’s largest horse racing venue. Since the inception of the event, the annual Indian Horse Relay has celebrated great success and brings together racers and spectators from across the country every year.

Indian Horse Relay brings together the best Indian relay racers from across the country for three days of excitement at Canterbury Park.