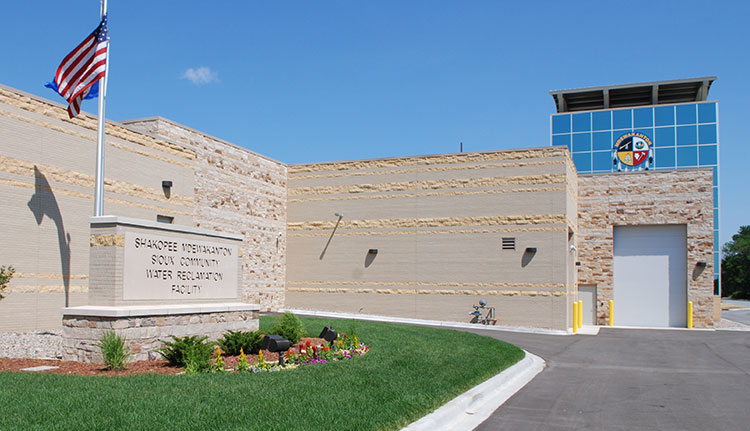 In 2006, the Shakopee Mdewakanton Sioux Community began use of our own Water Reclamation Facility. Construction on the facility began in February 2005 and took just 18 months to complete.

Designing, constructing, and operating a tribal WRF is a very important achievement in strengthening self-determination and self-governance. Not only did this project strengthen sovereignty, but it also brought state-of-the-art wastewater treatment to the United States and created additional resources for the SMSC.

The WRF treats wastewater from all tribal residences and Community enterprises. Use of treated effluent to irrigate The Meadows at Mystic Lake and other landscaped areas has reduced groundwater withdrawal by the SMSC by approximately 35,000,000 gallons a year. In addition, wildlife flock to the site of the effluent release, relishing the temperate water during the cold Minnesota winter when most other water bodies are frozen. The wetlands provide a home for Canadian geese, muskrats, mallards and mallards. The unique characteristics of the WRF are the direct result of the Community’s dedication to protecting and preserving the environment.

Facts About the Facility: The Technology

As part of the water recycling system, there are solids remaining after the water is removed and treated. These biosolids are pressed and dried for use as fertilizer in a drying process that is the first of its kind in the United States. The SMSC uses these Class A biosolids as feed stocks for the Organics Recycling Facility , which uses natural processes to break down organic material such as yard trimmings, food waste, and agricultural by products into compost. This compost is then used for landscaping throughout the Community and may also someday provide a future fuel source in waste-to-energy recovery facilities. The average yearly production of biosolids as of 2013 is around 136 tons.

Groundwater is the sole source of drinking water in Scott County, where the SMSC is located. Region-wide groundwater demand is increasing, with limited groundwater available. The Community is considering injecting treated effluent from the WRF into the aquifer for use in the future. The Community has completed a full-scale pilot study monitored by a technical committee of tribal, federal and state agencies and is reviewing the results. This project has generated nation-wide interest, as technology developed here will be readily transferable to other communities. SMSC is the only tribal government currently active in this process.

The Shakopee Mdewakanton Sioux Community Water Reclamation Facility has been honored by three organizations for its excellence:

The Minnesota American Council on Engineering Companies (ACEC) presented the SMSC with a Grand Award at a banquet held January 26, 2007. The ACEC competition recognizes projects that demonstrate a high degree of achievement, value, and ingenuity. For more than 40 years, this competition has awarded uniqueness and originality.

The Minnesota Society of Professional Engineers (MSPE) 2007 Seven Wonders of Engineering Award was presented to the SMSC February 23, 2007, in Bloomington, Minnesota, as part of MSPE’s Engineers Week celebration. Entries were judged on the engineering methods, systems, and skills utilized by the project team, as well as the project’s social impact.

Governor’s Award for Excellence in Waste and Pollution Prevention

The SMSC facility was also awarded the Minnesota Governor’s Award for Excellence in Waste and Pollution Prevention. The 16th annual award was presented during a banquet on February 28, 2007. The award honors superior environmental achievement by Minnesota non-profit organizations, businesses, and private institutions for programs or projects that benefit the environment by reducing or eliminating wastes and pollutants at the source.

A vegetated Green Roof was suggested by the SMSC Business Council during the design phase of the WRF. The 30,200 square foot, vegetated roof hosts more than 45,000 plants which have become habitat for pollinators, grasshoppers, spiders, and other insects.

Department of Land and Natural Resources

The SMSC Department of Land and Natural Resources helps fulfill the tribe's strong commitment to environmental stewardship. Visit our Notable Projects page to learn more about our initiatives.